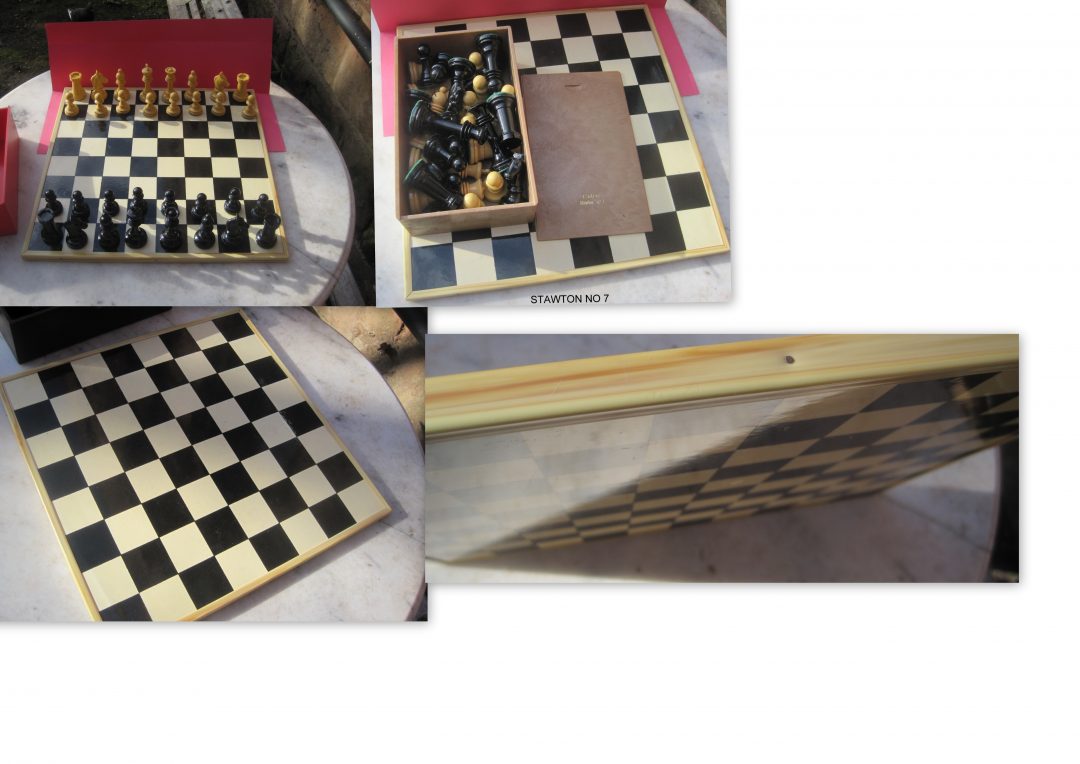 My very good friend and fellow chess collector, Joost Van Reij, sourced this info and also the indication “Stawton” is unique for Escardibul, as far as I know. This is one of the quotes I found on the internet about a wooden set:-

‘The company of José Oriol Escardibul was founded in 1840 in Barcelona and started as a famous producer of Billiard equipment. In the 1920’s, under the management of Eusebio Escardibul, the company expanded its products inter alia to chess and over the years became one of the famous Spanish chess set manufacturers with the crude Knight carvings being one of their trademarks. It doesn’t get more Spanish than this!’

This site is not all about expensive sets, hence I have and will offer information, whenever possible, which I hope will benefit collectors. Everyone will know that purchasing a decent Jaques set and box will be rather expensive, so when I started collecting, I made a decision to purchase plastic chessmen, with a focus on older sets. one can easily fork out close to two thousand pounds for such a package, which works out rather more than the cost of my entire plastic set collection. Would I swap my plastic collection for an early Jaques cook set and box ? Not a cat’s chance in hell would I do such a thing.

There is no shortage of advice offered to aspiring collectors including Chess magazine in the 1930’s to invest in ivory, but at present things are looking bleak (unless you buy for love) once the proposed legislation is passed. For now good ivory sets are very gettable at favourable prices – for a lot less than they were costing a few years ago.

The nice quality board in the photo and set was a genuine eBay bargain, but there are opportunities for newer collectors to keep an eye on plastic chessmen – watch out for ‘Bakelite’ claims which are in most cases bogus – even ‘amber’ claims are best to be wary of with steep prices being charged. In the past I have shown hand-turned quality early plastic chessmen to very experienced collectors and received much appreciation for the quality of these sets. Getting hold of decent inlaid plastic boards is far from easy, but it is worth keeping an eye out for one if you like the material.

The Spanish set in the photo is a moulded one with a 9.5 cms king and the inlaid board is 14 inches square – neither items are Bakelite. I also have a smaller version of this set with a king height of 7.5cms.