THE BRITISH BOARD COMPANY?! 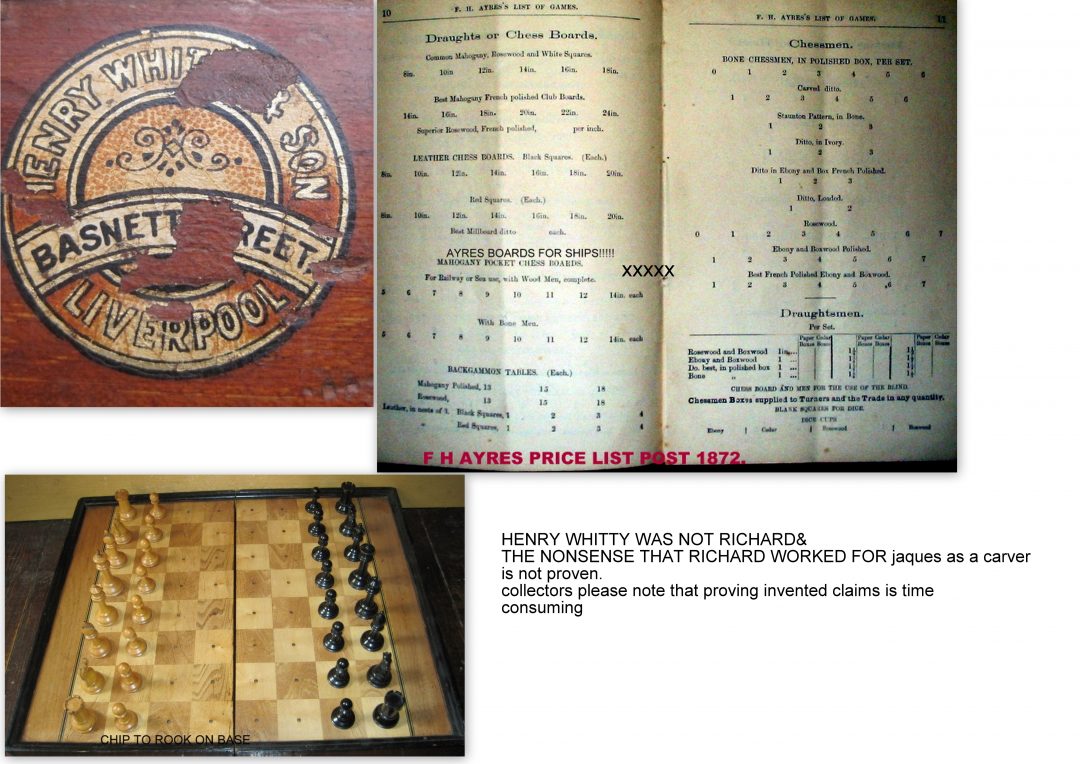 I  have decided to post this important article on the British Chess Company (BCC) because of this seemingly unproven factual statement on the HOS antique website. In C.N. 5788, a correspondent asked for information about the BCC, and we now reproduce a feature entitled  ‘A Chess Industry’ from page 65 of the 17th April 1895 Chess Player’s Chronicle. It quoted a correspondent who had written to the Cheltenham Examiner:

‘A factory principally devoted to the turning out of thousands of chessmen annually is a striking testimony to the growing popularity of the royal game of chess, and a brief notice of a visit to the Rock Mill factory of the British Chess Company, at Stroud, may be not unwelcome. The building is situated on the Painswick Road, about a mile from Stroud, and the motive power is amply supplied by a rapid brook, which here forms a pretty cascade of about 12 feet in depth, the water foaming and frothing over rugged and projecting rock. The substantial building is of three floors, and was formerly an ironwork factory. On the ground floor is a stock of seasoned woods – ebony, rosewood and boxwood – which are sawn or sliced into thin veneers for the chess squares, while cubes suitable for chessmen are cut into various sizes, and also flat slabs for chess boxes and the backs of boards. On the higher floor, the turner and joiner are busily at work turning the chessmen and plugging the stems with lead for the club sets; handsome boxes are being morticed, and the ivory and rosewood mosaics neatly adjusted. A still higher floor has the French polisher, and women finishing off the linings and silver plates of the boxes of prize sets. The Company possess a patented pattern of very ornate chessmen, but their modification of the old Staunton pattern, approved by Mr Blackburne, is most popular at matches, and the materials for the late British and American match were of this pattern and supplied from their stock. A very ingenious set of men was prepared especially for the Chess Lectures of Mr Lasker, which required vertical diagrams of chess openings. This problem was solved by cutting out flat pieces of large dimensions which were hooked on to the desired squares, the chessmen resembling somewhat those pieces of puzzle maps which were in vogue 20 years ago. Of course, the colours selected were only determined upon after experiments made under gas and electric light. On leaving, our reflection was, would that Gloucestershire turned out as many chessplayers as its factory does chessmen’.

These chessboard and backgammon boxes were in common use until around 1900. Similar chessboard and backgammon boxes can be found bearing the Jaques of London and British Chess Company labels, and were all most likely produced by the same factory in the UK. Richard Whitty was a carver in the John Jaques factory in London. He operated his business from a shop located at 14 Tithebarn Street, Liverpool, and later at Bassett Street in Liverpool. Whitty manufactured other games and chess pieces as well as chess and backgammon boards. Richard Whitty appears to have been running his own business since around 1870 or so.

Collectors -please note that Frank Camarrata places a great deal of emphasis on proof of claims, but this most likely statement appears to not have even a crumb of evidence to back this up – it is far less convincing than his SCA (So-Called Ayres) claims! Considering I have in my collection a stamped BCC board but this report sourced by Michael Mark from the very reliable Chess Notes, in a small select e-Bay Collectors Group but states in black and white that BCC made their own boards!!

When a well-known chess authority appoints himself as the emperor of chess research via Google photos, he is contaminating accepted antique descriptions. We all know over here exactly what the BBC is but I have never heard of the HOS -the invented 19th century BBC (British Board Company?!). Why does this ficticious BBC exist? Because Frank says it probably existed, but this simply won’t do. Should this CBB (Cannot Be Bothered) to cross- check this made up stuff out, you can bet that serious researchers will be rather sceptical of this highly dubious claim. Should the HOS antiques website keep producing this made up stuff  in its descriptions, its credibility will be eroded, and the whole structure collapse like a house held together with a wooden structure ridden with woodworm and dry rot!

I very much enjoy collecting chess boards, and I simply would never have the balls to make this public observation to people as intelligent as the number of CCI members who I have been in communication with since 2004. F H Ayres research means a lot to me as one of  the small number of collectors who got off their asses and thus started digging, and the evidence gathered by Keith Middleton and published on his public Picasa web album, which compared to Frank’s website, crumbs of proof resembles a loaf of bread. This nonsense would seem that no knowledge-seeking collectors will ever be accepted unless Frank decides to agree with their efforts regardless of whatever proof they offer. At least some of us practice what we preach by offering some form of proof for such claims.