A German box but is the set a German one? 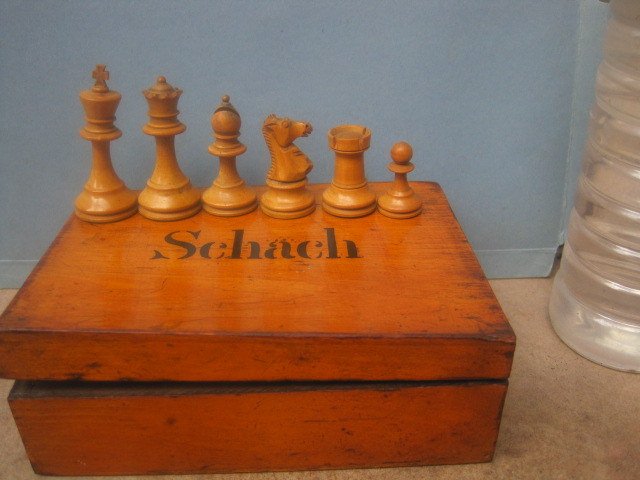 Some time ago I purchased this small single weighted Staunton boxwood/ebonised 7 cms king chess set with minor damages all because of the box which had a rather annoying looking crack on the lid. The toothy- looking knights purchased at a minimal cost. I like boxes, but have some serious reservations about the origin of many sets in boxes sold as ………. whatever the seller decides?! As a useful exercise I contacted a couple of German collectors and asked them what they knew about how to identify a German made Staunton? Well, their information on this issue was vague, and even a select few CCI members admitted to me that their knowledge was scant. The Chess Museum run by the late Nicholas Lanier offers some information on French Stauntons including Lardy, Chavet:-

This area of either French or German could do with more investigation, all because with things as they are, one can just make any claim without a scrap of evidence. Because a set such as mine was placed in a box all because it is a collectable thing, and if unchallenged research gets messed up for a considerable length of time. The only way I can see progress being made is looking for traits/clues with chessmen claimed to be both French or German.  Here is an admission from myself: – I have never seen what looks like a proven quality Staunton set that is of proven French origin!  Also a CCI member has mentioned to myself that he has yet to see a French Staunton with ebony pieces. On this research issue I am all ears and eyes – the Lyon’s research hunt will continue, but any help from fellow collectors would be much appreciated!