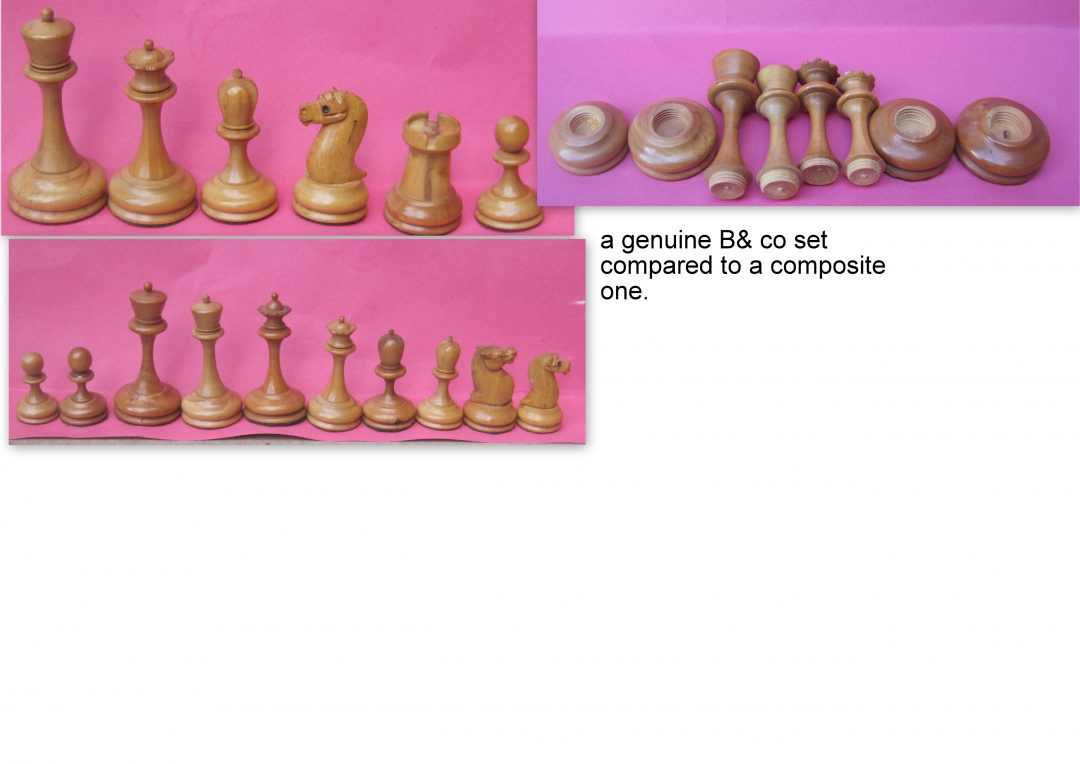 A recent purchase via Eldreds auctioneers in November 2019, this was a most welcome surprise, since the set arrived in ‘mint condition’ with a slide lid  box which is unlikely to be the original. I have wanted a correct B & Co set for some time having been informed that my set is a composite one, but I got rather huffy with the fellow collector with his views. One wonders how many sets out there in collections have composite pieces, so sometimes bad news is not received as well as the informant might expect.

My existing set has 4 non-original knights but I very much like them. Not much is known about B & Co, but I checked out two sites for info on these sets and learnt something! Tim Millard’s antique chess shop confirmed something that I was unaware of (we don’t know everything!) that these delightful sets came in various sizes and were weighted – the Camaratta site confirms this – thanks to those sites for info.

I believe that my box is not original,  but the set fits in well and the set’s king is just over 3 inches tall – these wooden pieces have a most unusual feature as the bases unscrew from the shanks. This was a clever way of saving on waste materials. These sets are highly sought after and a message to the reproduction makers from India:-  the rooks do not have crown stamps on the tops plus no surviving B&Co sets that I have seen have faked up antiqued finishes, a more recent development which I despise, and if I am given one as a gift I will smash it to bits with a sledge-hammer!  These repro sets with fictional fairytale tournaments invented to aid selling are a pack of lies – even checking out chess notes by Edward Winter can, perhaps this needs to be said, and if it harms their business then ‘tough’ considering the prices paid for chess sets paid with crown stamps.  What we don’t need to see is the opportunity to create composite-looking sets with faked up finished repro pieces.