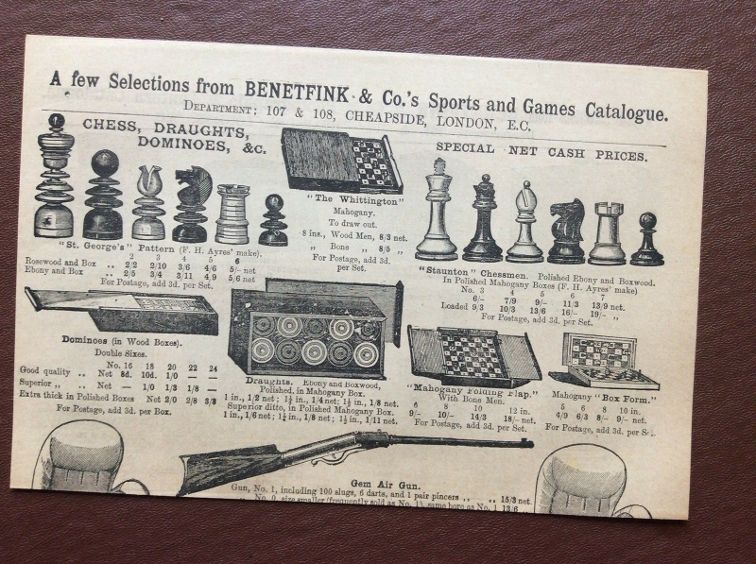 These illustrations kindly provided to me by a gentleman known as Ralph are from a late 19th century Benetfink catalogue which one hopes that the well researched information on F H Ayres will stand as the many surviving decent late 19th early and early 20th century sets were NEVER made by BCC. That reference to Ayres make for both St George and Staunton is clearly illustrated on this page.

By far the biggest issue on researching chessmen is this: – a dealer sells a set for a decent profit, but will such an individual freely admit that the original description was incorrect ? This monetary reason is just why researching chessmen can be so toxic, as a top premium paid out for an error ridden description won’t come as good news to any collector who owns such a set. Therefore there is so much information out there and no doubt more to come over time, as collector worker bees keep buzzing about looking for scraps, crumbs, and what ever tasty morsels exist out there, all thanks to the internet.

Thomas C. Ayres “Established 1810” preceded F. H Ayres. The firm was best known for sports equipment and rocking horses. They produced an enormous number of parlour and garden games too and were  great rivals with Jaques with frequent lawsuits being filed in both directions for infringements of patents and copyright. Established in 1810 by Edward Ayres in Clerkenwell, initially as a turner and maker of furniture and games, the firm increased their output into the burgeoning market of general sports equipment. Towards the end of the 19th century they were probably the leading manufacturer of sports and games equipment in Britain. In 1895, known then as F. H. Ayres, they employed a staff of 600 people at their manufacturing headquarters in Aldersgate Street, London. Soon after, they became incorporated. A steady decline followed in the early twentieth century and rocking horse business became their leading business. Eventually, as a result of World War II, things came to a head and they became part of Slazenger in the1940’s. Some addresses were Edward Ayres in Clerkenwell 1810 Thomas C Ayres 28 Great Bath Street Clerkenwell, London EC Frederick Henry Ayres, 10 Baldwin’s Place, Leather Lane, London EC by 1865 F.H.Ayres, 71 to 75 Red Lion Street, Clerkenwell by 1869 to1877, F.H.Ayres, 111 Aldersgate Street, London, EC from 1877 F.H.Ayres Ltd. c.1905 (known mainly for outdoor games):-

Any researcher worth a sack of potatoes can see how misplaced those published words are! One hopes this puts to bed the incorrect information that “BCC took on Jaques on every front“. Perhaps some sceptics on the capabilities of Ayres will reconsider their beliefs on the opinions of researchers held in high esteem out there.