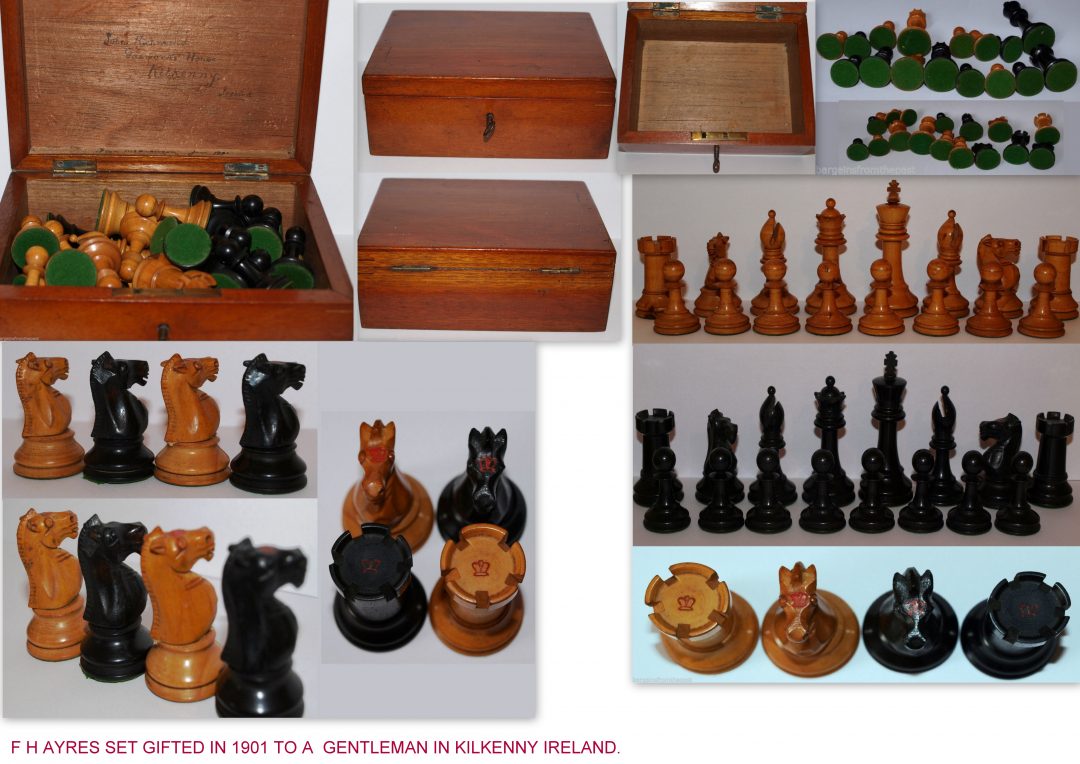 Last night on ebay a set which one can attribute to Ayres being made by Whitty? Complete nonsense made up garbage by a seller of chessmen creating a fiction well worthy of Walt Disney.

Between 2010 and 2012 a group of 4 collectors CCI members decided to pool their research and find out if we could agree on what Ayres sets were, as we all had public Picasa albums and had no monetary angle as none of us were selling chessmen:-

We shared photo views and agreed that an article by Gareth Williams for the Chess Collector in Vol No.V1 No.3 in 1997 detailed just how large a concern Ayres was, and chessmen with crown stamps being called ‘BCC’ on the most prominent web site in 2003. Receiving the British Chess Company catalogue made me most determined to disprove this serious inaccuracy! Both myself and Keith Middelton produced public Picasa albums to offer the case for Ayres chessmen.

What was a mystery to us was why no research published in the chess collector embraced the Williams article like we did. And in a private discussion with a researcher/dealer was the admission was that these crown stamped chessmen were not worth that much!!!

What a pity that the value of a chess set dictated the lax efforts in researching the makers.

CCI member Keith Middleton produced a fantastic Picasa album for the benefit of all interested parties – google ‘Peter Armit’ to view his sets.

Keith goes into great depth to prove his case (a rather better effort than my album current research thinking by CCI members), so now at last more and more E bay sellers are attributing these chessmen as Ayres sets.

I highly recommend that collectors study Keith’s album ‘CORPTAXMAN MTAXCONS’ where he leaves his frank and fair minded views on chessmen without any monetory angle plus a study of the Mick Deasey site is very useful.

To see the public Picasa albums type in ‘Guy Lyons chess’ and please note these 4 gentlemen have been an invaluable source of info for my presumed chess knowledge and of course the old E Bay Collectors Group, including some most knowledgeable collectors who are Chess Collectors International (CCI) members.

A hearty humble thanks to you all.

Mick Deasey sourced this fascinating information to offer substance to the Ayres case:-

One thing I have found as a collector is that knowledge is presumed to be in the hands of dealers.

Yetif, a farmer, sells 120 dozen eggs a day – does he actually know which came first the chicken or the egg?