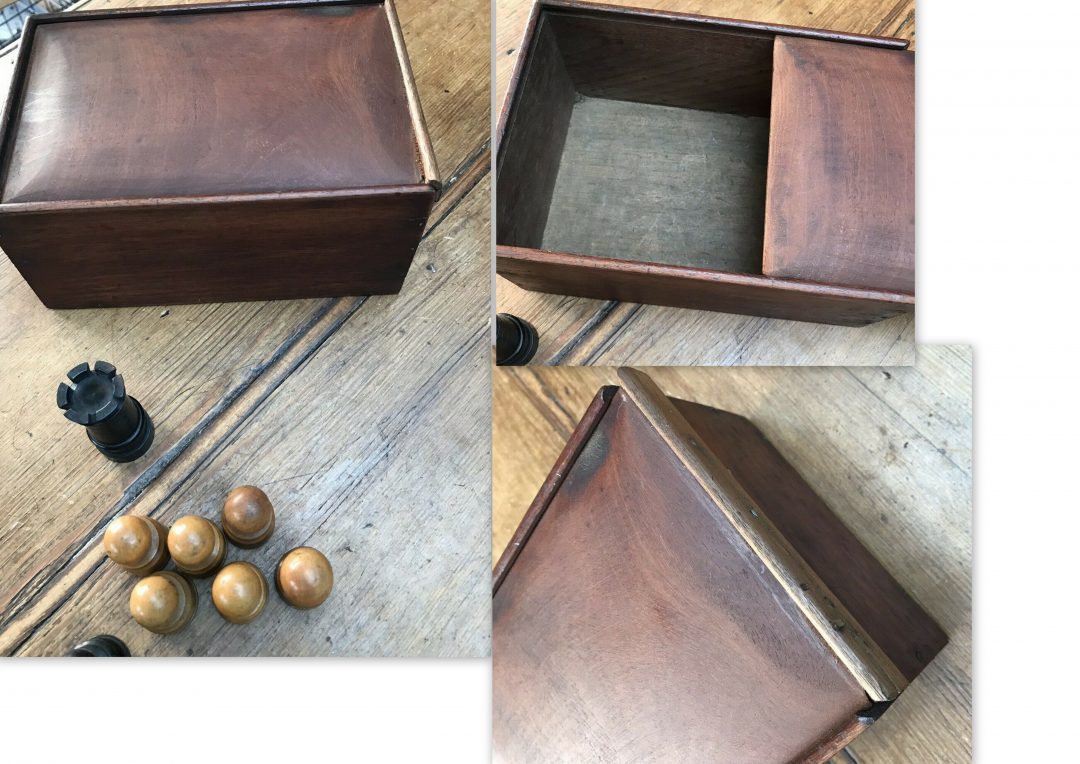 As with any collector I have a number of boxes, and getting hold of original boxes for decent sets is not easy unless you are prepared to spend decent money. Getting a Jaques box with a decent label, or even a BCC one  one has to be careful as copy labels exist and can be acquired, thus added to an antique box and sold off as the real thing much to the detriment of the unfortunate buyer. So over my limited years of collecting (some 16 years), I have tried to study boxes with great interest – acquiring a nice box for a quality set can be very satisfying, and it is a good idea to state if the box is original, as we collectors are the custodians of chess research. Getting sets out there with boxes in decent condition is far from easy, as I have repaired dozens of them in the past couple of years.

A recent purchase of a lovely box on eBay illustrated what the collector has to contend with. This crude repair job must have been done by ” Brutus The Butcher” – see the picture – which clearly shows the bevelled edges with a slim strip of wood to enable opening and closing of this slide lid box . The wooden lid weighs about 170 grams, and the seller on eBay declared the crude repair attempt, which was clearly visible when the lid was shut and a horrible gap on the right was about 0.25cm, so this needed surgery! Firstly I eased the edge of the slide lid off and noted the three nails with sharp points having been smashed through the slide lid, perhaps even laced with poison for all I could guess. The nails been removed with great care, and a quality wood filler used to hide the scars of this butcher’s work, I hope he suffered a crucifixion!  Also the crude nails used were over an inch long  and then hammered through his hands Roman style! Unbelievable butchery, perhaps during his apprenticeship he was not advised of PVA wood glue plus having a damp cloth handy to remove the lumpy excess. What I suspect is that butchers have little regard for their meat carcasses, thus only focusing on the monetary value of the item. Stuffing over-sized chess sets in fragile boxes is unwise, and as I have seen, boxes sell for rather more than the sets are worth.

As I explained to an eBay seller recently that if I nit picked over every issue that I encountered as a buyer, I would risk going stark raving mad!