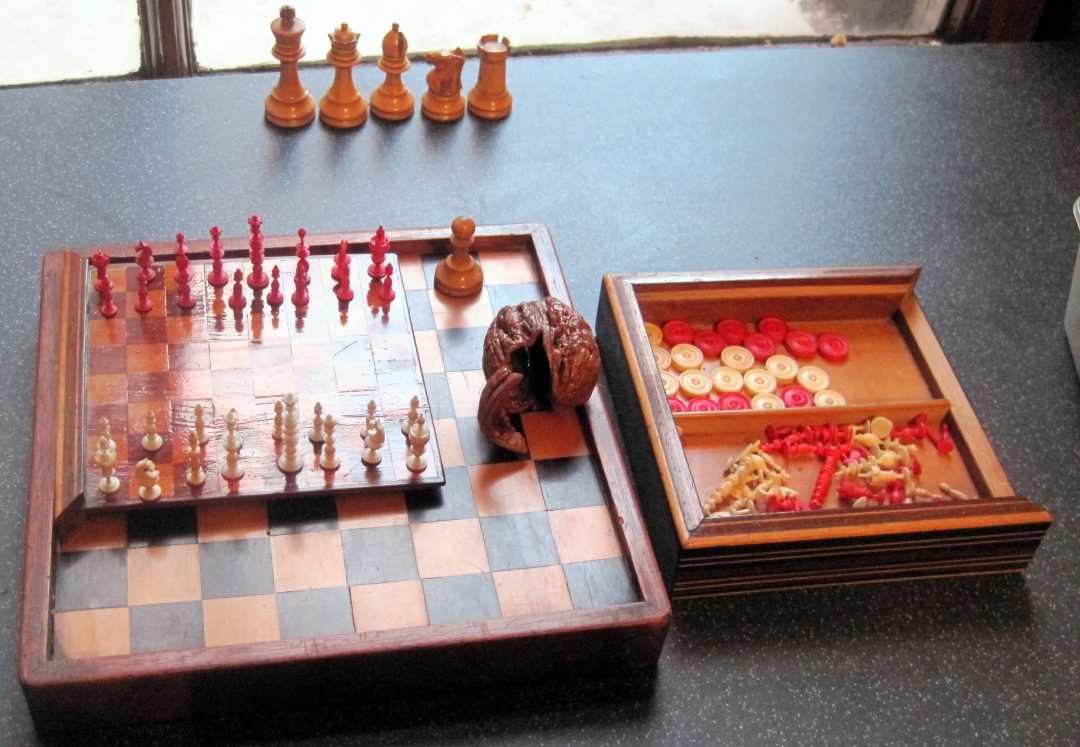 some years ago I purchased a miniature set in damaged condition, but not quite complete. Having shown the damaged set to well known Dutch collector Michael Melching, who encouraged me to try to fix the pieces, I had a go with limited success, however getting all the bone chess pieces shown on the small inlaid wooden board turned out to be ab rather challenging adventure – my journey could best be described as ‘The Walnut Saga’!!

Last November 2019 I noticed similar looking miniature pieces on offer at Rowleys Auctions described as ‘a travelling chess & draughts’ which was won for a modest sum, however  upon receipt of this item, I was unable to form a complete set. Then last January 2020 I bid for a set and won it from Stroud Auctions. Upon receipt of this lot, I noted a walnut enclosed, that had not been mentioned by the auctioneer, and when I assembled the collection of pieces from three different sources, hey presto the set appeared to be complete, but I now have a decent looking version of a Frankenstein miniature bone set which I believe is probably late 19th century and early 20th century!

I was delighted to be able to assemble the pieces and take a photo of the assembled set on this slide lid board which is 4.5 inches square, but the small draught pieces pictured are ivory. As they often say The Good Lord loves a trier/never give up on a quest/good things often come to those who wait!

The walnut case is fragile, and placing the pieces in it with great care is very advisable, since these tiny pieces can easily break if crammed in like stuffing a Christmas turkey.

I have sourced the CCI publication ‘Miniature Schachspiele‘ by Ulrich Schadler and Thomas Thomsen, which is a most useful publication for the less knowledgeable on these delightful little chessmen.